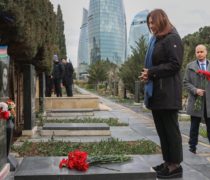 Brussels based think-tank European Policy Centre (EPC) hosted a conference titled ‘Nagorno-Karabakh and the role of the EU’.

‘The Nagorno-Karabakh conflict between Azerbaijan and Armenia poses a significant threat to the security of the South Caucasus and beyond, including related to energy and transport infrastructure.

The EU, which has slowly upgraded its relations with the region over the past decade, still remains very much a peripheral player, seemingly content with supporting the efforts of the OSCE Minsk Group and financing a number of confidence and peace-building projects.

However, with the EU being one of the most ‘neutral’ external powers involved in the region, and having made conflict resolution a priority of both its European Neighbourhood Policy and Eastern Partnership, there would seem to be scope for the EU to take on a greater role.

In these two Policy Briefs, Zaur Shiriyev and Richard Giragosian offer an Azerbaijani and Armenian perspective on the role of the EU in the Nagorno-Karabakh, while also coming up with a number of concrete recommendations for further engagement’, according to the information posted on the official website for the EPC.