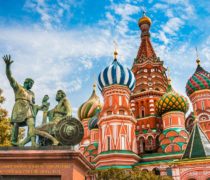 Members of the European Parliament from Slovakia Boris Zala and Katarina Nevedalova visited Baku on May 17-18. The visit was organanized by the European Azerbaijan Society.

The discussions at the meetings focused on cooperation between European Parliament and Azerbaijan.

Katarina Nevedalova visited one of the hostels in Baku`s Binagadi district, which temporarily housed IDPs expelled from their native lands as a result of the Armenian aggression.

She also became familiar with the activity of the European Azerbaijan School.