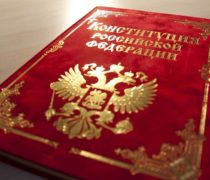 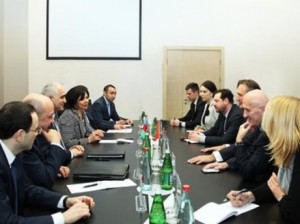 Montenegro is interested in development of relations with Azerbaijan in various spheres of the economic investments.

This statement came from chairman of the Montenegrin Parliament, OSCE PA President Ranko Krivokapic at a meeting with Azerbaijan’s Economy and Industry Minister Shahin Mustafayev in Baku on April 17.

Krivokapic expressed satisfaction with developing relations between Azerbaijan and Montenegro, stressing that his country is monitoring closely the dynamic development of Azerbaijan.

In turn, speaking about the development of relations between Azerbaijan and Montenegro, Mustafayev stressed the importance of mutual visits to enhance cooperation between the two countries.

An Azerbaijani delegation visited Montenegro in March 2014. The first meeting of the joint intergovernmental commission on economic cooperation and a business forum were held there.

«The high level of bilateral political relations and the potential of the two countries create favorable conditions for the expansion of economic cooperation,» Mustafayev said.

«The memorandum of understanding on the Trans Adriatic Pipeline (TAP) project, signed last year is an excellent opportunity for cooperation between Azerbaijan and Montenegro in the energy sector,» he said.

«At this stage, several investment projects are being considered. Their successful implementation will serve the development of relations between the two countries. There is great potential for expanding the cooperation in the fields of agriculture, tourism, infrastructure and investments,» he said.

While discussing the Armenian-Azerbaijani Nagorno-Karabakh conflict, Mustafayev stressed that as a result of Armenia’s aggressive policy, some 20 percent of Azerbaijani lands have been occupied.

«Compatriots turned into refugees and IDPs,» he said. The minister regretted that double standards are still applied towards the conflict. «The representatives of Armenia and the fictional regime get visas for trips to Europe. The opportunities are being created for their making statements from the international platforms,» he said.

Mustafayev stressed that the international community must demonstrate a principled position on the Armenian-Azerbaijani Nagorno-Karabakh conflict based on international law.

Earlier in April, Baku hosted a business meeting of Azerbaijan and Montenegro, which brought together businessmen from industry, agriculture, food industry, tourism and construction sectors to discuss the prospects of bilateral cooperation between the countries.

Cooperation between two countries started to develop faster recently. Earlier in January, 2014, the Civil Service Commission under the Azerbaijan President and the Montenegro Human Resources Management Authority signed an action plan on cooperation for 2014-2015.

Azerbaijan’s state energy company SOCAR is going to build a modern resort and hotel complex in place of an abandoned navy base in the Bay of Kotor. For this purpose, Azerbaijan started the €500 million investment project in Montenegro in 2013, which is scheduled to be finished by 2016.

About 1,500 tourists from Azerbaijan visited Montenegro last year. The trade turnover between the two countries amounted to $11,850 in 2013.