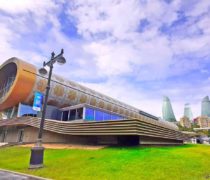 Azerbaijan has great opportunities for holding Euro-2020, UEFA president Michel Platini said at a briefing today during his visit to Azerbaijan.

It should be stressed that UEFA has approved Baku as a candidate for holding Euro-2020 to be held in 13 cities of the continent.

Baku’s candidacy was put forward by AFFA. Baku will compete with the cities from 31 countries. So, UEFA has approved 32 cities as candidates.

«I see that Baku has many chances to hold Euro-2020,» he added. «But I have a neutral position in this issue.»

It should be stressed that the cities that will host Euro-2020 will be determined in about a year, on September 25 next year.

It should be recalled that UEFA head together with AFFA president took part in a foundation laying ceremony of a training base for the teams in Mardakan’s football center.